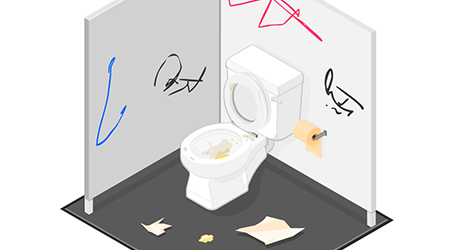 Restroom vandalism is an act that’s all too familiar to facility managers, building service contractors and custodians. It’s a serious issue that wastes money and causes unnecessary labor. Understanding the ramifications of these acts, a judge sentenced a 35-year-old Wisconsin man to three years probation and some jail time for intentionally clogging several toilets in a park and his place of work.

Patrick D. Beeman was found guilty of seven counts of misdemeanor criminal damage to property. He had originally been charged with 12 offenses before some were dismissed. Each count carried with it a 30-day jail sentence. Beeman will be granted work release during his sentence.

According to a report from the Sheboygan Press, a criminal complaint states that in 2018 officers found a toilet in a community center bathroom was overflowing because someone had intentionally clogged it with a water bottle. Police looked into the situation and found that other area toilets had been clogged in the same way on 10 different occasions in 2017. Each act caused roughly $200 in damage.

While the intentional clogging of toilets is a common form of restroom vandalism, there are a number of other criminal acts that people carry out in facilities across a wide range of markets. The president of a BSC once told Contracting Profits that low-rent facilities that hire low-wage staff tend to experience more vandalism than other facilities — even high schools.

Vandals aren’t a boring bunch — they get creative with the messes they make and the things they damage. Graffiti occurs often, as does damage to air fresheners and soap dispensers. Luckily, there are steps facilities and businesses can take to further discourage these acts. For example: It’s a good idea to place air fresheners at a height that is hard for vandals to reach. A touch-free flush valve is a great asset because it makes it harder for someone to flood a toilet — someone would have to flush a toilet or urinal 10 to 20 times in a row just to carry out the act.