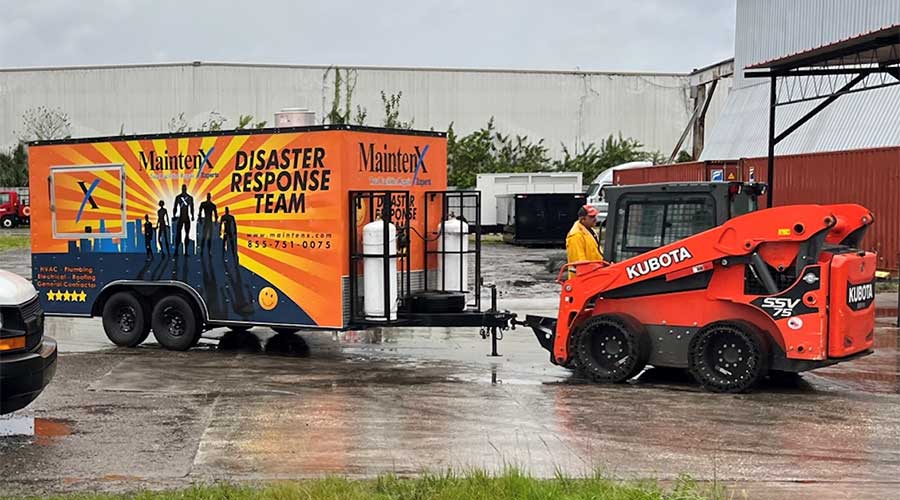 MaintenX, one of the largest national facility maintenance and repair companies in the U.S., announced it has achieved significant progress in helping restore the electrical, plumbing, roofing, and air conditioning services of hundreds of businesses on Florida’s Gulf Coast struck by Hurricane Ian in late September. The repairs build on MaintenX’s legacy of improving people’s lives through quick, cost-efficient, expert repair solutions, and the company’s efforts have helped restore, and in some cases even save, the lives of residents and business owners who have suffered and been displaced by the storm’s carnage.

Ian made landfall on Sept. 28 and tore across the southern part of Florida’s Gulf Coast, bringing powerful gales and water surges that inundated parts of the state. The storm has so far been responsible for claiming the lives of at least 120 people in Florida, according to state and local officials, a number that is believed to be the most fatalities recorded in the state from a single hurricane since 1935.

The storm is also expected to cost private U.S. insurers $63 billion in claims and cause the largest storm-related losses in Florida’s history, according to an estimate from Karen Clark & Co., a risk-modeling firm. The forecast includes losses to residential, commercial and industrial properties as well as automobiles, Karen Clark & Co. said in a report.

“Although, technically, we classify MaintenX as a world-class maintenance and repair company, our larger mission is to improve the quality of people’s lives by delivering comprehensive, affordable, expert services to provide greater comfort and security in homes or businesses,” says Bill Schaphorst, vice president, new business development, MaintenX. “And there’s no more important an opportunity to prove this than before and after a catastrophic storm like Ian. Tens of thousands of people have been left with damaged, unusable homes, and businesses, and we’ve deployed our full team of professional electricians, plumbers, roofing experts, and air conditioning experts to try to restore their lives as fully as we can through rebuilding the places most dear to them.”

To help prepare for this calamity, MaintenX dispatched response teams to several of the Florida counties in Ian’s path, and it helped business owners and managers board up and sandbag many of their buildings before the storm hit.

After Ian passed, MaintenX teams were deployed across the most hard-hit areas to help business owners by providing generators and keeping them fueled until utility service was restored, mitigating flood damage and removing excess water, cleaning up debris and opening up areas for travel again, repairing irrigation lines and enabling a steady source of water, and, finally, inspecting affected facilities to identify any residual damage and give clients peace of mind that no surprise maintenance needs would emerge.

These post-storm recovery efforts also included a rescue that resulted in the saving of three lives. A hotel in Bonita Springs, Florida, lost power during the storm while three guests on life-support machines were there after they had come after evacuating their homes. The hotel manager called MaintenX for emergency help, and Disney Herrera, a MaintenX disaster project manager, and his team were able to immediately respond, come to the hotel, locate a generator, and get it up and running just as the hotel had used almost all its emergency backup battery power. As a result, the team helped save the lives of three people who could not have survived without power for their life-support machines.

“It’s a duty and a privilege to be able to help these residents and business owners at such a time of need,” said Disney Herrera, disaster project manager, MaintenX. “Thorough preparation before a storm and speed in repair after a storm are two cornerstones of our approach to serving clients as well as helping average people recover from destruction on the scale that Ian produced. Our teams are fortunate in having both the experience in rebuilding all kinds of building structures as well as expertise in providing a full range of repair and maintenance services, such as electrical, plumbing, roofing, and air conditioning services, to people and businesses with urgent repair needs.”