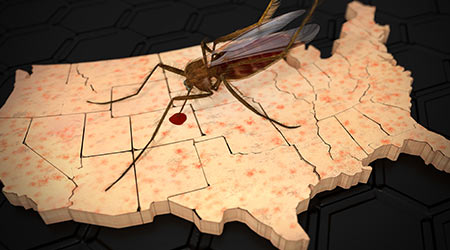 For the fifth year in a row, the Atlanta area tops pest control leader Orkin’s Top 50 Mosquito Cities list. Atlanta is followed on the list by Dallas, which jumped four spots from last year, New York and Washington, D.C. Texas holds the most spots on this year’s list with seven cities, followed by Florida and Louisiana with four cities each.

“Mosquitoes continue to be a major health concern, especially in the summer months,” said Orkin entomologist, Chelle Hartzer. “They can transmit several diseases to humans including Zika virus, West Nile virus and several kinds of encephalitis. Each of these mosquito-borne diseases may have serious side effects.”

Although the spread of Zika virus in the U.S. has significantly decreased, from 5,168 cases in 2016 to 433 cases in 2017, it remains a concern as there is no treatment, cure or vaccine for the virus. One of the best strategies for eliminating mosquito-borne diseases is to reduce populations of the mosquitos that spread them.

Below are the most common mosquitoes in the U.S.:
• Aedes aegypti Mosquitoes: The Aedes aegypti (commonly called the yellow fever mosquito) mosquito can carry and spread Zika virus and has been found in more than 20 states from coast to coast. Unlike other mosquito species, Aedes aegypti mosquitoes bite during the day and night.
• Culex Mosquitoes: These mosquitoes are in every state and can carry and spread West Nile virus. They are most common at dusk and dawn.
• Anopheles Mosquitoes: In addition to spreading Malaria, which has been considered eradicated from the United States, Anopheles mosquitoes can transmit dog heart worm and other viruses. They have been found in every state and are most active at dusk and dawn.

Reducing items that attract mosquitoes and actively working to prevent them from reproducing and moving inside the business are the best protection from mosquito bites.

“After mating, females typically seek a blood meal to aid in egg production. She often lays them in standing pools of water. Egg numbers vary from species to species but can be as much as over 100 eggs in a single laying,” said Hartzer.

Orkin recommends the following tips to help protect against mosquitoes:

Eliminate Mosquito-Friendly Conditions in and Around Your Exterior
• Any object that has the potential to hold water should be removed or cleaned out frequently, as mosquitoes can breed in just an inch of standing water.
• Clean gutters to avoid rainwater build up. Be sure to check for puddles that form on the roof from rain water, leaking pipes or even condensation from air conditioners.
• Change water weekly in fountains, potted plants and any containers that hold standing water.
• Keep pool water treated and circulating.
• Trim shrubbery, as adult mosquitoes like to rest in dark areas with high humidity, such as under the leaves of lush vegetation.

Eliminate Entry Points
• Inspect doors and windows for drafts or openings around their perimeters and window air conditioning units. Install weather stripping around doors and utilize caulk around window frames.
• Ensure that window screens are securely in place and free of holes or tears.
• Keep doors tightly closed. A propped-open door is a welcome mat for mosquitoes to enter your building.