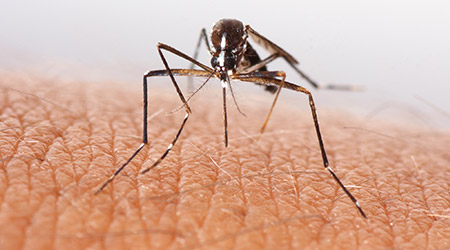 The Atlanta area tops pest control leader Orkin’s list of Top 50 Mosquito Cities for the fourth year in a row. Atlanta is followed on the list by Washington, DC and Chicago. Twenty-one metro areas in the Southeast are included in the ranking, which is the most of any region in the United States.

“Mosquitoes are a public health threat,” said Orkin entomologist, Mark Beavers, Ph.D. “Zika virus is currently one of the most notable illnesses that can be spread by mosquitoes, and it will likely be a problem again this year, especially in areas where the type of mosquito that can carry the virus thrives,” added Beavers, who recently participated in the Center for Disease Control and Prevention’s (CDC) 2017 Aedes Vector Control Summit, a forum dedicated to improving mosquito control methods and reducing the risk of diseases such as Zika.

Mosquitoes are an issue across the U.S. and become more active as temperatures rise, with mosquito season often ranging from April to October.

Despite the emergence of Zika virus in recent years, many Americans remain unconcerned. A recent Gallup poll found that 90 percent of Americans believe they are unlikely to contract Zika virus, but the CDC has confirmed more than 5,000 cases in the United States since January 2015, with more than 220 transmitted in the U.S.

“There is no treatment, cure or vaccine for Zika virus, so the primary protection is avoiding mosquito bites,” said Beavers, adding that, “Zika virus isn’t the only serious illness that mosquitoes can spread, as they are known transmitters of West Nile virus, chikungunya virus, dengue and malaria.”

Reducing items that attract mosquitoes and actively working to prevent them from reproducing and moving inside the home are the best protection from mosquito bites.

“Female mosquitoes are attracted to a multitude of things, but the three major ones are carbon dioxide and heat when they are trying to find a blood source and moisture, usually in the form of standing water so they can lay their eggs” said Beavers.

Eliminate Mosquito-Friendly Conditions
• Remove standing water buckets, toys and other containers, as mosquitoes can breed in just an inch of standing water.
• Change water weekly in bird baths, fountains, potted plants and any containers that hold standing water.
• Keep pool water treated and circulating.
• Regularly clean gutters so water doesn’t pool.
• Trim shrubbery, as adult mosquitoes like to rest in dark areas with high humidity, such as under the leaves of lush vegetation.

Eliminate Entry Points
• Repair and use window and door screens to help prevent entry.
• Close gaps around windows and doors to prevent mosquitoes from getting inside.