Lawsuit: Janitor Forced To Work While Infected With COVID 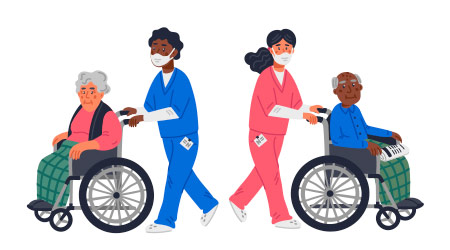 A janitor is suing her former Louisville nursing home employer after it allegedly fired her for not working while she had COVID-19.

Kathy Kramer, a 64-year-old janitor making $9.97 an hour, claims Essex Nursing Home and Rehabilitation Center fired her when she said she wouldn't work until she quarantined for 10 days after testing positive for the virus, reports the Lexington Herald-Leader. The case is now being brought before a U.S. District Court.

The newspaper reports that 20 residents of Essex have died due to COVID-19 since March. In total, 68 residents and 37 workers tested positive for the virus at the time of the report.

When Kramer called her employer to say she would quarantine for 10 days, the employer allegedly told her to return to work where she would be placed on a separate area of the nursing home that treats coronavirus patients. Kramer's lawyer says that request is unreasonable because she gets a ride to work everyday from a coworker and she would have to walk through the common area of the nursing home during each shift.

When Kramer still said she wouldn't be coming into work until after her quarantine, she was told she was no longer employed, according to the lawsuit.

Kramer's lawyer says she needed the job to survive and that she truly cared about the residents at the nursing home.