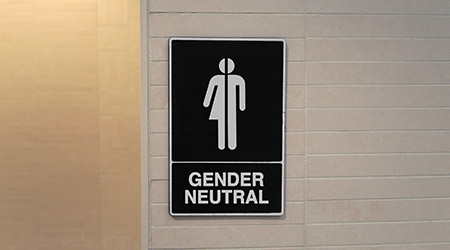 A bill that would make public schools and districts in Tennessee vulnerable to civil lawsuits if they allow transgender students or employees to use multi-person restrooms or locker rooms is one step away from becoming a law.

The bill was approved by Tennessee's Senate with 21-7 vote on Wednesday after the House passed it with a 65-24 vote on Monday, reports the Associated Press. The bill now heads to Gov. Bill Lee (R) for final approval.

If the bill becomes law, students, faculty and other staff could sue a pubic school or district for monetary damages resulting from "psychological, emotional, and physical harm" they claimed to have suffered as a result of the school permitting a transgender person to use an occupied multi-use restroom or locker room that doesn't align with their gender at birth.

The bill has been met with opposition. Democratic lawmakers in the state say that the bill goes after the civil rights of transgender people. They also say that such a law could leave the state vulnerable to lawsuits.

More than 180 businesses, some large, have joined the Nashville LGBT Chamber of Commerce in opposing bills targeting that community, according to the Associated Press.