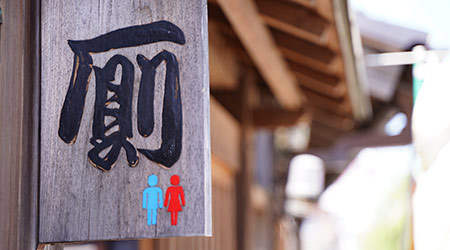 Japan is making improvements to the public toilets offered throughout the nation in hopes of championing more than just the 2020 Summer Olympics, which takes place in Tokyo July to August, reports Nikkei Asian Review.

Changes to the nation’s public toilets include the installation of 20 toilets at a rest stop just outside Tokyo. Travels can elect to use a feature that tracks their pulse to determine if they a too tired and need to take a break before returning to the road.

In August, Japan-based toilet manufacturer, TOTO, remolded public restrooms near Itsukushima Shrine, a World Heritage Site in Japan. The changes included the addition of 22 toilets, some of which are made specifically for children and the disabled. The stalls feature monitors that give instructions on how to use the handwashing functions in five languages, including English.

Narita International Airport, which is located in the Tokyo area, is spending $45 million to upgrade toilets at various locations.

Japan hopes changes like these will impress the large amount of foreign visitors that will come to the country for the Olympics.

Japan tends to upgrade its public restrooms in phases, according to the report. The country began making wheelchair accessible toilets more common in the late 1990s and multifunctional restrooms became popular a few years later.