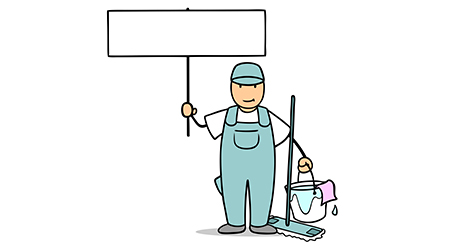 California's current shelter-in-place orders are helping to protect the public's health, but they're also emptying the bank accounts of some janitorial workers.

The statewide orders have lead to more people working from home and more businesses shutting their doors. As a result, there are fewer jobs for commercial cleaning companies, which in turn have had to slash the hours of their frontline janitorial workers.

In San Francisco, the janitors who clean Lyft's headquarters protested their reduced hours on Monday, reports KQED. The janitors took up the street in front of the headquarters holding up signs suggesting that they were being exploited.

The entire situation is difficult. Yes, California says that janitors are essential workers, but the businesses they clean are often times non-essential, meaning they lose work.

In some cases the cutbacks in hours are significant. In March, more than 60 janitors employed by Service By Medallion were told they would only be receiving two days of work per month for the foreseeable future, according to statements an SEIU Local 87 representative made, reports KQED.

Last week, the United States Department of Labor announced the release of a letter that outlines new CARES Act guidance regarding unemployment insurance for states in response to the COVID-19 pandemic.