Janitors Of South Florida Speak Out About Wages 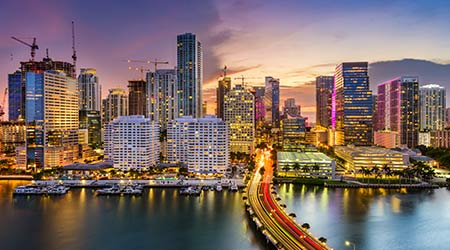 South Florida — Miami in particular — has been booming for a while, with more than half of Miami-Dade County’s major offices, retail building and residential lofts being built in the last 20 years. These towering high-rise buildings now make up 62 percent of the region’s total market value. Despite this boom, the people who clean buildings in South Florida are struggling due to low wages, reports the Miami Herald.

Citing Bureau of Labor Statistics, the Herald says the average contracted office janitor in South Florida earned about $8.50 an hour, which is more than $2 less than the median local wage for all workers in the area. At the $8.50 a hour pay range, janitors in South Florida are in the bottom 10 percent for janitorial earnings in the entire state.

Miami isn’t a cheap place to live. Which is why its metro area ranks 380 out of 382 metro areas in janitorial wages after cost of living has been factored.

Hoping to evoke a change, tens of thousands of janitors in South Florida are letting their opinions of the the pay situation be known. But even with this unrest, people are still applying for janitorial jobs. South Florida has 40,200 janitors and commercial cleaning employees, which ranks ninth in the nation by region. Janitorial work in Miami alone has rose more than 75 percent in the last 21 years.

So if things are so bad, why aren’t the people working working in janitorial positions in South Florida not quitting? The answer is they often cannot afford not to keep these positions.

Elsa Romero, for example, is 55, single, and has diabetes. She struggles now to pay for her medication, but if she were to quit her janitorial work, she’d be in even more trouble.