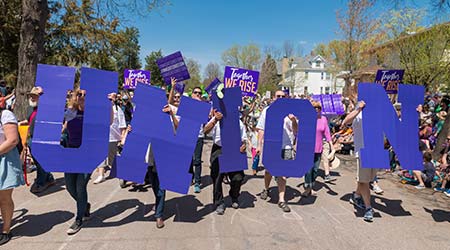 Janitors in two major U.S. cities are demanding greater protections as more of the businesses they clean open their doors.

Around 2,500 janitors in Denver and another group of custodial workers in the Twin Cities are holding separate calls for great protections from illness and other rights.

Service Employees International Union (SEIU) Local 26, which represents 4,000 janitors in the Minneapolis-St. Paul area, is asking that the people who clean commercial buildings receive better training, be allotted time to regularly wash their hands during shifts and also have their uniforms cleaned daily. They union also wants the janitors it represents to be kept abreast of any possible exposure to disease, reports Minneapolis/St. Paul Business Journal.

More than 100 SEIU members in the Twin Cities area have been diagnosed with COVID-19 since Mid-March. One of those members, a janitor at U.S. Bank Plaza, died.

Twenty percent of SEIU members surveyed say they aren't being given gloves and two in every five say they don't have masks, according to the business journal report.

In Denver, a crowd representing area janitors took to the streets and sidewalks demanding "justice for janitors." These janitors in the Mile High City are demanding a new contract that would promise them personal protective equipment, better wages and healthcare, reports CBS 4 in Denver.

The Denver area chapter of SEIU tells CBS 4 that janitors are keeping the city safe and that they deserve to be appropriately compensated and respected for their work.