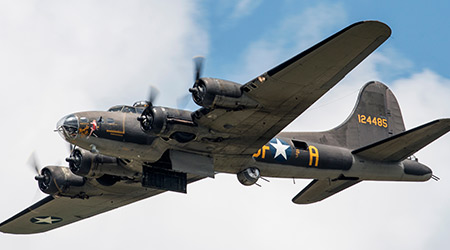 From the 1950s – 1980s, students in Cranston, Rhode Island, knew Raymond Barnes as the school custodian. But Barnes has a history of heroism that even his own children didn't know — until recently.

According to local reports from WPRI, Ray’s son, Ron, had been looking for the name of the B-17 bomber that his father flew in World War II. What he found was an image that would unlock a story of his father that had never been told.

In the Providence Evening Bulletin, on Jan. 20, 1944, there was an article article about American airmen who had been taken prisoner in Germany. One of the men pictured was Staff Sgt. Raymond Barnes - a Wickford, R.I., native.

SSgt. Barnes had been a radioman on a B-17 bomber that had been shot down. Barnes was one of only three men who survived the crash and soon became prisoners of war.

When he was alive, Ray Barnes didn't talk about his wartime experiences. It wasn't until Ron started his research on the bomber — 20 years after his father passed away — that he uncovered the realities of his father's time in the war.

Ron found the plane's serial number, and that led him to the official crash report, which contained his father's handwritten account of what happened:
"We were above the clouds, so I couldn't see where I was going to land. A German fighter plane circled around me while I was coming down; I guess he was radioing my position to the people on the ground. I thought I was a goner, but he didn't shoot."

Ron eventually found the nickname of his father’s bomber — Melancholy Baby — and a new appreciation for his father’s service, the article said.