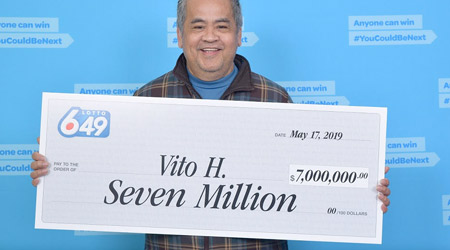 A janitor was recently given 7 million reasons to quit his job after winning the lottery days before his 58th birthday. Instead, he says the newfound wealth won’t result in retirement.

Though Vito Halasan of Surrey, British Columbia, Canada, doesn’t plan on quitting his job, the $7 million earnings have encouraged him to cut back the number of hours he works, according to a press statement from the British Columbia Lottery Corporation.

“I remember scanning my ticket and seeing all these numbers," says Halasan. “I have really blurry vision so I had to hold the ticket right up to my face. I couldn’t believe it.”

Haslan’s life is quite literally a rags-to-riches tale. He left the Philippines in 2009 looking for work in Canada. Eventually settling in as a janitor, he works to give his three kids and four grandchildren a comfortable living.

“I buy lottery tickets so I can dream,” says Halasan. "I dream of being able to take care of my kids and make their future better. Now we’ll be able to buy a nice house for my children and grandchildren."

Halasan isn’t the only janitor to recently take home a considerable amount of cash — though his $7 million in winnings is significantly more. Aristeo Flores of Scotts Valley Middle School in California earned $5,000 after being named Cintas Corporation’s 2019 Custodian of the Year. Flores’ honors are extra special because they were earned through more than 278,000 online votes, and will result in his employing school receiving $5,000 in products and services from Cintas.