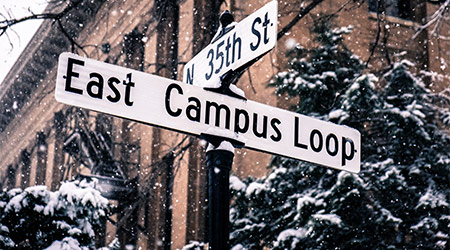 Don Puckett has cleaned the University of Nebraska-Lincoln campus for more than 45 years. The job has seen him go from a young, 22-year-old man to a father of three nearing the age of retirement. It has taken care of him with steady pay and time off when he had medical emergencies. So by all accounts, Puckett's long career has been an important part of his life. But many don't view the profession in the same light as Puckett, and it really shows right now.

Puckett and the custodial services at University of Nebraska-Lincoln are the subject of a story the Omaha World-Herald did on janitors in the era of COVID-19. The paper discovered that, despite all the work available right now, the university's custodial services department is understaffed. Yes, about 160 workers are employed to clean the campus, but that's noticeably less than the 181 people Assistant Director Estelle DeJonge would like to have working right now.

Maybe people are turned off by the gritty, hard work the job entails. Or maybe it's the pay. The World-Herald went through a database of the salaries paid to workers at the university and found that most custodians make between the mid $20,000s to high $30,000s a year.

The pay might be a bit low and the work demanding, but at least the janitors working in the department are giving the tools to succeed. The university has bought for them four new equipment backpacks, four new cars and six foggers. They're also given hand sanitizer made by members of the university's chemical engineering department and private sponsors.

The custodial services department at University of Nebraska-Lincoln currently cleans more than 130 buildings, which amount to 5 million square feet of space. There's a little bit of relief to the workload as some offices require less cleaning since certain workers are performing their duties from home, but high-touch surfaces are an absolute priority and continue to receive the traditional two or more cleanings a day.

Those cleanings will continue to occur under the care of Puckett, who enjoys his job so much that he plans to work another five to 10 years if he is able.