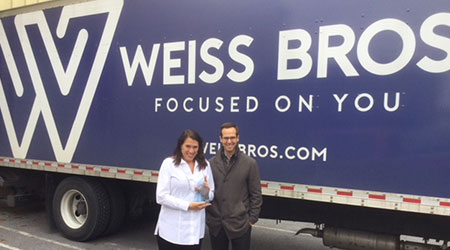 Each year, Weiss Bros. awards one vendor representative who is chosen based on many factors such as their ability to help grow mutual business, rapid response rate, dedication to clients, and appreciation for the Weiss Bros. team.

“Janet has done it again as she has earned her 4th Weiss Bros. Vendor Rep of the Year award (2009, 2010, 2013, 2017),” said Michael Weiss, president, Weiss Bros. “No one has earned this award more times. She responds immediately, helps us grow our business, steps up when we need her assistance and is a true partner with Weiss Bros. We are honored to have Janet work with our team.”

The award was presented by Michael Weiss at Weiss Bros. headquarters in Hagerstown, Maryland.