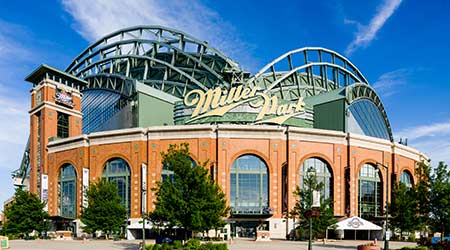 Milwaukee is well known for the contributions it has made to the brewing industry. Now the city’s MLB team is creating a reputation for being Earth-friendly after agreeing to recycle the plastic cups from which those ballpark brews are drank.

The Milwaukee Brewers have teamed up with nearby SC Johnson to create a new market and new recycling model that will help recycle 1 million plastic cups from the team's ballpark each season, announces SC Johnson.

Starting this upcoming season, fans at Miller Park will be able to place plastic drink cups branded with the SC Johnson logo in specially-designed receptacles to separate them from other waste. SC Johnson will collect the cups and use the recycled plastic in Scrubbing Bubbles bottles.

SC Johnson says the Brewers are the first professional sports team in the United States to link a waste stream to a specific product.

“We all need to work together to help close the plastic recycling loop, and I hope this first-of-its-kind initiative with the Brewers will serve as a model for other major league teams, companies and even other sports leagues,” says Fisk Johnson, chairman and CEO of SC Johnson, whose headquarters is less than a hour’s drive from Miller Park.

The partnership between the Brewers and SC Johnson was finalized in an event featuring Johnson, Brewers President Rick Schlesinger and Brewers pitchers Brent Suter and Corey Knebel. Suter, who holds a bachelor’s degree in environmental science from Harvard University, recently launched his own initiative, Strike Out Waste, to help his teammates reduce plastic use inside the ballpark and in their personal lives.