Is It Smart To Rehire Former Employees? 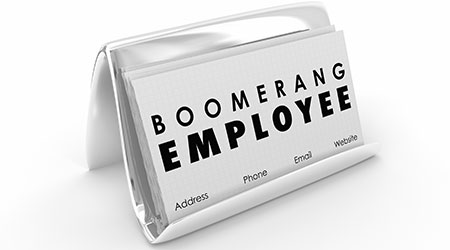 A common piece of career advice is to not “burn bridges” when leaving one employer for another. After all, who knows what opportunities may present themselves in the future?

For some, that may be even more true than for others. They are called “boomerang employees,” those who leave a company only to return.

Although numerous studies have examined the performance outcomes for both internal and external hires, few have considered “boomerang employees” who are rehired by a company where they previously worked.

Michael A. Campion, Purdue’s Herman C. Krannert Distinguished Professor of Management, and collaborators addressed that research gap in the paper “Welcome Back? Job Performance and Turnover of Boomerang Employees Compared to Internal and External Hires,” in Journal of Management.

In contrast, less attention has focused on “boomerang” employees who leave organizations and are later rehired by the same organizations, he said.

Historically, rehiring former employees has rarely been considered because choosing to leave was viewed as disloyal, Campion said.

“In an era when the average employee will work for many different employers during their career, however, organizations are becoming more open to rehiring former employees,” he said. This may be particularly salient as organizations rebuild following layoffs associated with COVID-19.

“Hiring former employees, who are a known entity, is thought to be less risky than hiring new employees,” he said. “They are also familiar with the job, understand the organization’s culture and values, and may have relationships with existing employees.”

Boomerang employees may also bring fresh perspectives and new knowledge and skills to the organization from their time away, as well as signal to existing employees that it is a good place to work.

To put these perceived benefits to the test, Campion and his research colleagues analyzed data on 30,714 employees of a large retail organization who were initially hired or rehired into a management trainee position.

“The results suggest that boomerang managers’ performance tends to remain the same after being rehired,” Campion said. “Additionally, initial turnover reason was not a good predictor of rehire performance when controlling for initial performance. Finally, boomerang employees who left the organization a second time tended to do so for similar reasons to those of their initial departure.”

“Interestingly, despite demonstrating less performance improvement and a higher propensity to turn over, boomerangs are more likely to be promoted than internal hires, and they are as likely to be promoted as external hires,” he said. “This suggests that organizations may use promotions to try to retain boomerangs, even though such employees may not be as effective as others over the long term. Taken as a whole, these findings call into question some of the proposed benefits of rehiring former employees.”