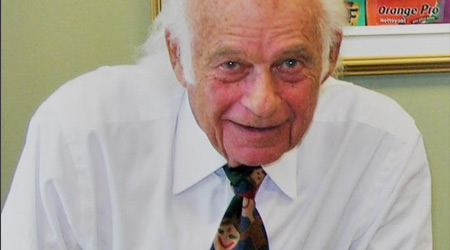 It is with great sadness that Avmor Ltd. announces the passing of Avrum (Avi) Morrow, philanthropist and founder of Avmor Ltd., at the age of 93 years old.

Avi Morrow founded Avmor Ltd., Canada's leading manufacturer of professional cleaning solutions for the janitorial and foodservice markets, in 1948 with his brother in law, Henry Chinks. Today, Avmor remains a family business that is known for developing sustainable cleaning solutions that effectively protect human health and the environment.

Avi’s unique personality helped instill a special culture at Avmor, including traditions such as an annual turkey give away to ensure that all employees have a robust holiday dinner.  Avi also brought his passion for art to the workplace with a beautiful custom designed mural painted in the cafeteria when Avmor moved to its current location in 1998.

This past October 2018, Avi and his wife Dora helped celebrate Avmor’s 70th Anniversary with its employees.  This celebration reflected his belief that all employees should be part of the organization’s success.

Avi was also widely recognized for his accomplishments in both the Sanitation Industry and the broader community.

He was awarded the Sam Tughan Achievement Award by the Canadian Sanitary Supply Association in 1993, the highest honour in the sanitary supply industry in Canada.

This was followed with the Jack D. Ramaley Award in 1998 from ISSA. This is an Industry Distinguished Service Award.  It is awarded to individuals that demonstrate the following:
• Outstanding service to the cleaning and maintenance industry
• Industry innovation, professionalism, and leadership
• Elevation of industry standards
• Promotion of ISSA’s growth and development
• Unselfish dedication without personal gain
• Emulation of the ISSA Code of Ethics.

Further, Avi made history when he was the first person from the sanitation industry to be named to the Order of Canada. This distinction, the highest honor for a civilian in Canada, was a tribute to Avi’s achievement in business and his lifetime of dedication to the community.

While Avi was deeply committed to the success of Avmor, he was also a great supporter of the arts.  So great was this passion that he transformed Avmor’s original headquarters in the heart of Old Montreal into an art museum.

Morrow commissioned over 400 paintings, sculptures, photographs and drawings from artists young and old, famous and unknown of the Avmor building at 445 Ste. Hélène Street.  This collection, which began when Avi asked RD Wilson to sketch the building for the company Christmas card in 1965, is still on display for people’s enjoyment.

He was also a longtime supporter of Canada’s Concordia University, McGill University, the University of Ottawa, and various other community organizations such as Sun Youth.

For over thirty years, every Spring, he was responsible for giving away more than 1,700 new bicycles, helmets and locks to disadvantaged kids through Sun Youth, all of which was done anonymously. But with his recent passing, it can now be revealed that Avi was the Bikeman.

Avi built a firm foundation for Avmor’s achievements in the industry, including establishing Avmor as an important partner for ISSA as early as 1950.

Avmor’s current president, Mattie Chinks, served on the ISSA board as Director Canada (1997-99) and again as vice president, president and immediate past/international president (2004-2006).

Paul Goldin, Vice President, Professional Cleaning Solutions, is the current president of the ISSA and has also been involved with ISSA for many years. Avi’s commitment paved the way for Avmor’s continued leadership.