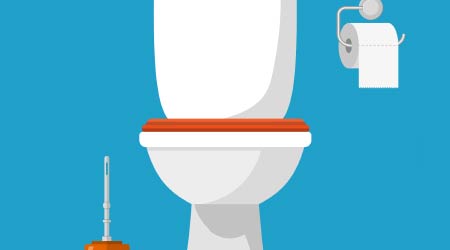 What appears to be a massive block of concrete that looks like it's floating above a parking lot is actually an impressive restroom facility near Tokyo's Olympic Park.

At first glance, the restroom looks like a tall slab of concrete placed closely between an overpass and what looks like the entrance to a train or subway station. However, the block of gray is actually a "monolithic concrete toilet" built by Japanese studio Suppose Design Office, according to Dezeen.

The toilet, which can be viewed in DeZeen's report, was built in anticipation for the Tokyo Olympics, which had to be postponed due to the COVID-19 pandemic.

The design office said it actually wanted to create something that looked odd to people.

According to Dezeen, the appearance that the restroom is floating is made possible by the fact that the concrete walls hang from a central column within the toilet block. The gap along the walls allows fresh air to enter the structure.

Inside the concrete walls is an attractive row of men's and women's toilets that are placed in between wash basins.

Another nice touch is the skylight placed high above.