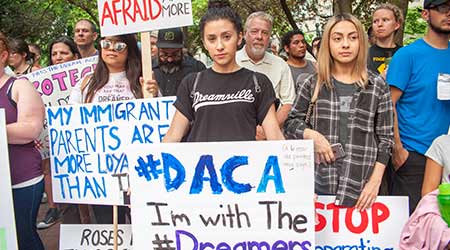 Three large immigration bills that could impact building service contractors and other employees within the cleaning industry have passed the U.S. House of Representatives Judiciary Committee.

The committee passed The Dream Act, American Promise Act and the Venezuela TPS Act, three bills that could grant permanent U.S. residency to more than 2 million people, reports "The Hill."

The Dream Act would allow undocumented immigrants who came to the U.S. as minors under the Deferred Action for Childhood Arrivals to work towards permanent citizenship. This group, often referred to as “Dreamers” have also been working in the U.S. since the Obama administration unveiled DACA in 2012. They have been able to stay and work in the country by renewing their DACA status every two years.

The American Promise Act would grant permanent resident status to the individuals who have been staying in the United States under temporary protected status or TPS for a certain amount of time. Originally provided by the Secretary of Homeland Security, TPS has been applied to individuals who came to the U.S. from a foreign countries that were considered unsafe.

The bills are expected to pass the Democrat-controlled house, but The Hill is less certain they would pass the largely republican Senate should they indeed move forward.

The three bills could have a considerable impact on the cleaning industry. As CleanLink previously reported, Building and grounds cleaning and maintenance occupations employ more than 30,000 people made eligible to work in the U.S. under DACA. Experts have said the lost of TPS and DACA workers would hamper the industry, which already has enough trouble retaining good employees.