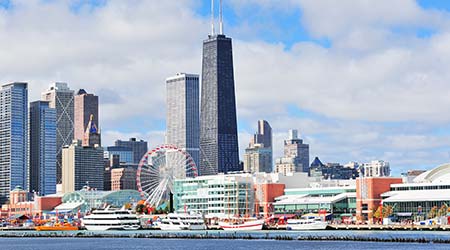 “The world needs cleaning professionals who are trained for outbreak and infectious disease preparation and response,” said GBAC Executive Director Patricia Olinger. “GBAC STAR ensures just that to protect public health and safety and make facilities as clean as possible.”

Built in 1916 for shipping and recreational purposes, Navy Pier is now one of the most-visited destinations in the world. Known as the “People’s Pier,” it attracts more than 9 million visitors to its cultural venues, retail stores, and restaurants each year. In 2016, as part of its Centennial Vision, the pier was redeveloped to offer new enhancements, dining options, and design features.

In addition to heavily trafficked destinations like Navy Pier, GBAC STAR Facility Accreditation is also well-suited for smaller facilities such as restaurants, retail shops, and small businesses. Its adaptability to facilities of all sizes and types makes the performance-based program sought after around the world.

Some of the facilities that earned GBAC STAR accreditation are:

FirstEnergy Stadium in Cleveland, home of the NFL’s Cleveland Browns

“GBAC STAR has helped facilities reopen safely and remain operational during the COVID-19 pandemic,” said ISSA Executive Director John Barrett. “By creating safer and cleaner environments, these organizations are able to protect their employees, customers, and visitors while also supporting the bottom line during these difficult times.”