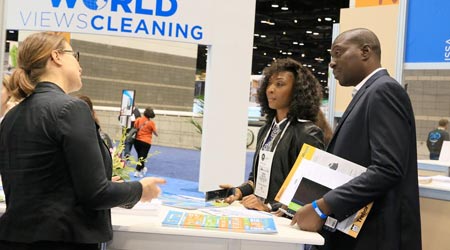 The final day of the ISSA Show in Dallas is not to be missed. Taking place Thursday — er, ThurSTAY — Nov. 1, the association has saved its biggest attractions for the last day of the show.

From a keynote speech by Former President George W. Bush to a behind-the-scenes tour of AT&T Stadium, attendees will not want to leave early and miss any of the excitement.

Here’s a look at the last day’s highlights.

After his speech, Bush will sit down with ISSA Executive Director John Barrett for an informal Q&A. The two will discuss world events, politics and the need for strong leadership in business.

Bush was the 43rd president of the United States and also the former governor of Texas. During his presidency, Bush led the country’s response to the 9/11 terrorist attacks in 2001. Since leaving the White House, Bush settled in Dallas and helped found his presidential library and museum. He also wrote his memoir “Decision Points.”

Bush has devoted much of his post-presidential time to charitable efforts, including fundraising efforts for disaster relief after the Haiti earthquake, as well as fundraising for wounded veterans and veterans suffering from post-traumatic stress.

The booth will also play host to the Innovation Award Ceremony and Reception where the winner of the overall ISSA Innovation of the Year Award will be announced. This winner is determined by a combination of the online voting results and a panel of judges comprised of industry professionals, members of the media, and veteran ISSA member representatives.

Exhibit Hall Hours
10 a.m. - 2 p.m.
Thursday is the last day to walk the show floor and see the newest products from more than 750 exhibitors. For help navigating the hall, see the exhibitor list and show floor map starting on page I/24.

Education Theater Schedule
These seminars take place on the show floor at booth 1051.

10:30 a.m. - 11:15 a.m.
State Of The Industry Panel: Building Service Contractors
Speakers: Marc Collings, Mary Miller and Michael Diamond
ISSA concludes its State of the Industry panel series with a focus on building service contractors. Panelists will share what they’ve learned from their past experiences, as well as provide solutions to help keep fellow BSCs on pace for success.

11:30 a.m. - Noon
ISSA CIMS & CMI Awards
Speaker: Brant Insero
During this awards ceremony, ISSA will honor companies and individuals who have increased their professionalism through industry certifications. These honorees are maintaining high standards of excellence and operational efficiencies.

12:15 p.m. - 1 p.m.
Be Intentional About Your Path To Success
Speaker: Gloria Strauthers

However, this tour isn’t all just fun and games. Attendees will also hear first-hand from the stadium’s cleaning crew and learn strategies and techniques that can be implemented into cleaning programs back home. These tips won’t just apply to stadiums, so everyone will have something they can learn and use.

Opened in 2009, the stadium (sometimes called “Jerry’s World” after Cowboys’ owner Jerry Jones) is the fifth largest football stadium and one of the most expensive sports venues ever built.