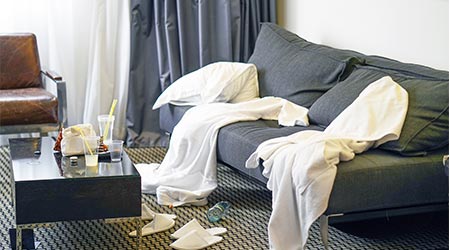 More than half of Americans say the level of cleanliness in a hotel they visit would impact their intent to book a future stay at the property, according to a new survey.

The survey, which involved more than 2,000 U.S. adults between late October and early November and was conducted online by The Harris Poll on behalf of Whittaker, also revealed that the level of cleanliness in a hotel would impact the perception of it for 49 percent of Americans.

“Most hotels can’t afford to send half of their guests packing if the level of cleanliness is not up to their expectations,” said Joe Bshero, director of Technical Services at Whittaker. “Maintaining clean rooms, lobbies, dining areas and fitness centers is key, especially given new concerns about cleanliness amid the pandemic.”

The survey also found that the level of cleanliness in a hotel would influence:

- More than 40 percent of Americans' desire to recommend the hotel to friends, family or colleagues

- How much time 39 percent of Americans spend in the hotel

“Proper carpet care is an important maintenance process, as many guests notice flooring upon entry into a hotel,” said Bshero. “Shoes and luggage can track in soils that dirty carpet, but regular vacuuming and cleaning can remove contaminants to make carpet look new again.”

Winter can also be rough on carpet. For tips on caring for carpet during the year's coldest months, click here.