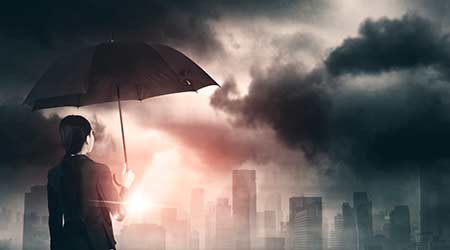 Does it seem that powerful and violent storms are becoming more common? Well, they are. There has been an astounding increase in the quantity of life-threatening weather events worldwide over the past 20 years, propelled largely by intensifying global temperatures and additional climatic changes.

The UN Office for Disaster Risk Reduction (UNDRR) has published a report showing that from 2000 to 2019, there were 7,348 major natural disasters worldwide, killing 1.23 million people and resulting in $2.97 trillion in global economic losses. In contrast, the previous 20-year period, 1980-1999, had 4,212 natural disasters that claimed 1.19 million lives and caused $1.63 trillion in economic losses.

A recent U.S. government report clarifies the overwhelming effects of climate change. The U.S. Global Change Research Program, a team of 13 federal agencies, was assembled with the help of 300 top scientists. It discovered that if greenhouse emissions are not reduced, the yearly average global temperature could surge to 90°F or more by the end of this century. This will create more frequent fire and flooding.

Additionally, a recent study published in the journal Science showed that the prevalence of significant tornado outbreaks (events lasting 1-3 days, containing numerous thunderstorms and including six or more tornadoes in close succession) have been rising in the U.S., nearly doubling in the previous half century.

"These are all things we should expect to see more and more of as climate change takes a deeper hold on our climate and on the extremities that it creates in our weather," Jeff Schlegelmilch, director of the National Center for Disaster Preparedness at Columbia University, told weather.com in a recent interview.

How Storm Damage Can Affect A Facility

The odds of storm damage affecting a facility are ever increasing. And having storm damage take down a company is more than an inconvenience. Disasters also hurt employees because of lost earnings due to downtime. They may not be able to afford to stick around until the facility reopens, especially if it’s closed for days, weeks or even months.

Those responsible for maintaining these facilities need to not only contemplate what steps to take to clean up and repair the damage, but also be concerned with the health and safety of the staff and/or occupants. And when a storm hits, time is of the essence.

Storm damage can potentially close a business forever. Here are a few sobering statistics from the Association of Small Business Development Centers:
• More than one out of four businesses will undergo a significant crisis in any given year.
• Of those businesses that suffer a disaster but have no emergency plan, 43 percent never reopen.
• Of those that do survive, only 29 percent are still operational two years later.

Considering these statistics, it’s vital to get facilities up and running as soon as possible following a disaster.

Get informed ahead of time for what is needed in the event that a major storm or tornado hits the facility. Most areas have a local emergency management office and/or a Red Cross Chapter. These organizations can provide information about local emergency response plans, evacuation plans and emergency shelters. It’s also a good idea to invest in a NOAA Weather Radio that will alert employees any time of the day or night for when possible dangerous conditions materialize.

But a recent survey by Office Depot found that over 60 percent of small businesses not only don’t have a plan, they argue, “we don’t need it.” Pretending storm damage could never happen to a facility is a huge mistake. Preparation is key. Create a detailed disaster plan that includes:
• Locations suitable for employee evacuation.
• Emergency contact info for every employee.
• Strategies to protect and access critical business records.
• Possible off-site locations where employees can work temporarily.
• Business’s insurance company contact info.
• A pre-emergency plan with a trusted disaster restoration company.

Disaster restoration companies like ServiceMaster By Simons will, at no charge, create a prequalified emergency restoration plan for companies. This inclusive document contains vital information about the business, including emergency contact information, shut-off valve locations, the general layout of the facility and other areas of importance. Keeping this documentation on hand helps business owners and restoration firms to react to unforeseen events quickly and effectively, which helps to minimize business interruption.

There are numerous reasons why a business needs an emergency restoration plan. The benefits of a having one simplifies and accelerates the restoration process by:
• Receiving a priority response from the commercial restoration company.
• Reducing costs due to quick response time and prior planning.
• Decreasing any downtime.
• Cleaning and restoring vital documents and property.
• Reducing stress because important decisions are already made.
• Having an experienced and fully-equipped restoration service at the ready 24/7.

The ultimate objective as a business that’s had storm damage is to be able to operate again. The function of a commercial emergency restoration plan is to ensure facilities are able to do so with as little time and money lost as possible.

You May Not Need To Shut Down

This is done when the restoration company keeps a clear channel of communication open with facility executives. They work out what the owners’ requirements are and how the restorer can operate around them in ways that are the least intrusive.

For instance, a good restoration company can schedule for the dirtiest work to be completed when working personnel and customers aren’t there. They’ll also cordon off the damaged areas so as not to endanger the staff or hinder the business. That way restoration cleanup can move forward while allowing the business to stay open.

So as serious as storm damage can be, it doesn’t have to mean the end of the world. By meticulous planning, there’s no reason why facility executives should have to shut their doors permanently.

Nasutsa Mabwa is the president of ServiceMaster Restoration By Simons in Chicago. The organization is IICRC ad OSHA Certified and is a 2020 recipient of the Better Business Bureau's Torch Award for Marketplace Ethics, and recipient of the 2020 Skokie Business of the Year Award, Honorable Mention Category.