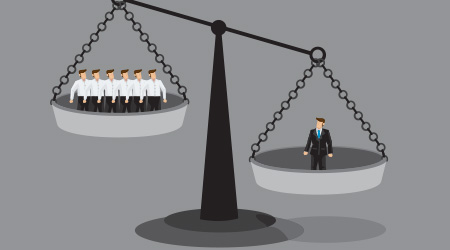 The House Committee on Financial Services has passed a bill that would require public companies to share the pay raise percentages of its executives and medium-pay employees, both of which would be also compared to the rate of inflation.

The goal of the bill is to help fix the income discrepancy between CEOs and other executive staff and employee's working in mid-range positions.

“The gap between executive compensation and the average worker pay has been growing for decades, but the COVID-19 pandemic has exacerbated the disparity,” said Bill Author Rep. Nydia Velázquez (D-NY) in a statement from her office. “The pandemic has left millions of working-class Americans feeling vulnerable and uncertain about their economic future; with many individuals and families forced to work part time or laid off altogether. Meanwhile, top executives are thriving and many have seen a highly profitable year. Disclosing the ratio between the pay raise percentages, which is what my bill does, will help to put pressure on millionaires and billionaires to pay their fair share.”

The bill, titled the Greater Accountability in Pay Act, or H.R. 1188, must be approved on the House floor before heading to the United States Senate.