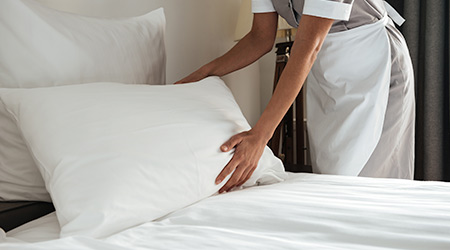 Copenhagen’s Hotel Ottilia has adopted a new self-disinfecting technology that means rooms might actually be able to clean themselves. According to Bloomberg reports, the technology is transparent, odorless and activated by sunlight. The main ingredient, titanium dioxide, is also found in sunscreen.

The antibacterial spray involved has been shown to break down microbes that range from influenza and salmonella to mold spores and allergens. It can also purify the air for up to a year, removing contaminants such as cigarette smoke or other odors.

The invisible coating is applied to surfaces annually and has been compared to Teflon. It was first tested at the Hotel Herman K, also in Copenhagen, and the two Danish hotels are now the world’s first to use it.

Hotel officials said one of the technology's biggest benefits is that it makes life easier for the staff. Housekeepers don’t have to apply chemical detergents and cleaners or breathe their fumes. They can vacuum, dry-clean linens and wipe down surfaces — and the coating does the rest.

The technology will save time for housekeepers meaning rooms get turned around quicker for hotel guests. The absence of chemicals also causes fewer potential allergic reactions.

The technology is expensive, according to hotel management, but it has reduced the labor load by 50 percent and reduces water consumption. It has also resulted in a drop in maintenance costs because housekeepers no longer use chemicals to clean.

One potential issue: A room has to be completely empty to be sprayed — which tends to happen only during renovations — and the formula has to be reapplied every year.