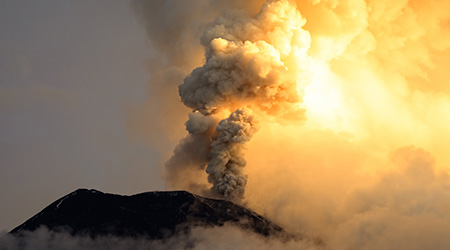 Schools on Hawaii’s big island are being inundated with ash that has been spewing out of a volcano as far as 20 miles away, according to ABC News reports. During the intermittent explosions at Kilauea's summit, ash shoots high into the sky and drifts down onto the small, rural campus and nearby areas. And no matter how often cleaning crews sweep the floors or spray water on buildings, a dusting of ash leaves everything looking gray.

"It keeps blowing around in the wind," one teacher from Pahala Elementary School said in the article. "It's like we're fighting a losing battle. We just keep wiping and wiping."

Pahala, near the southern end of the island, is downwind from subdivisions that needed to evacuate after lava started spewing from cracks in the ground three weeks ago. But although school is still in session, the smog and ash has led to many absences, Pahala Vice Principal Deisha Davis said. One day last week, 48 percent of students were out, she said.

School officials have been monitoring air quality in an effort to keep students and faculty safe. For example, students were kept inside when sulfur dioxide emissions were high. Officials also handed out ash-filtering masks, although they keep running out because some kids misplace them. There's also a "safe room" with air conditioning for students and faculty to go when it's hard to breathe.

Another school, Naalehu Elementary, is just 17 miles from the Pahala campus but it hasn't seen as much ash, said principal Darlene Javar, who lives in Pahala.

"Their (Pahala’s) staff is cleaning daily. If there was ever an issue with safety, the school would close," Lindsay Chambers, a spokeswoman for the state Department of Education, said in the article. "By staying open and providing that normalcy, the feedback has been that it's helpful."