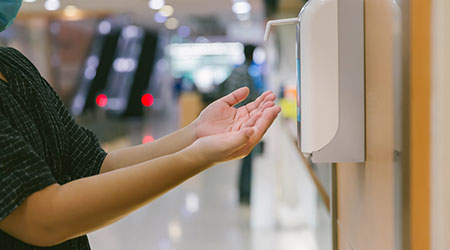 The increased used of hand sanitizer during the COVID-19 pandemic has led to more reports of children suffering chemical injuries to their eyes, according to a study out of France.

The French Poison Control Center looked at reports of children getting the hand sanitizer in their eyes and found that these accidents occurred seven time more often between April 1 and Aug. 24 2020 than they did during that same stretch in 2019, reports CNN. In total, 16 kids were admitted to a pediatric hospital in Paris for hand sanitizer exposure to their eyes during that 2020 span, compared to just one in 2019. Two of the 16 kids had to have surgery to transplant tissue into their corneas.

Hand sanitizer exposure accounted for 9.9 percent of incidents where chemicals got into French kids' eyes in 2020, compared to just 1.3 percent in 2018.

The possible reason experts give for the hand sanitizer getting into the eyes of kids makes sense. All of the children who were hospitalized were under the age of 4 and researchers say their small stature puts them at eye-level with hand sanitizer dispensers.

A separate study in India on eye injuries to children caused by hand sanitizer during the pandemic uncovered two cases where two children ages 4 and 5 suffered sensitivity to light and damage to the eyelid, respectively. Both children recovered from the injuries after treatment.