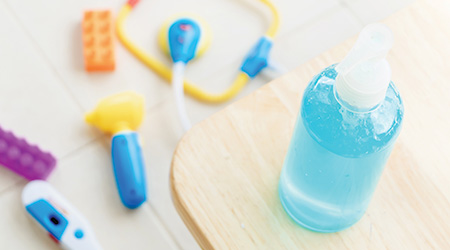 How kids clean their hands could affect how often they miss school, according to a recent study in the journal Pediatrics. In fact, researchers in Spain found that children who used hand sanitizer instead of soap and water actually reduced their sick days, reported fewer respiratory infections and used less antibiotic prescriptions.

The study looked at 911 toddlers (up to age 3) who attended 24 different day care centers in Almería, Spain. They split the children, their families and their day care centers into three groups: One group used hand sanitizer to clean hands, and one used soap and water — both with strict protocols. The third was a control group that followed its usual handwashing routines.

According to CNN reports, all groups attended hand hygiene workshops before the study began. But the hand sanitizer and soap-and-water groups attended follow-up sessions about respiratory infections and fevers and received documentation about hand hygiene. They were given hygiene protocols including washing hands before and after lunch, as they arrived home and after coughing, sneezing or blowing their noses.

The study found that the soap-and-water group had a 21 percent higher risk of contracting a respiratory infection and a 31 percent higher risk of being prescribed antibiotics than the kids using hand sanitizer. Finally, there was a 23 percent drop in respiratory infections among the students using hand sanitizer compared with those in the control group.