HAI Risk Down 22 Percent In US Hospitals 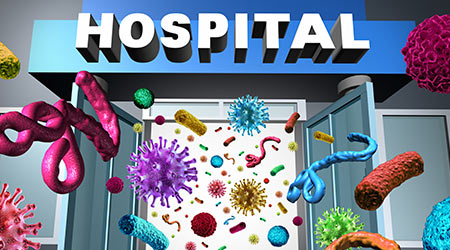 Recent survey data suggests that acute-care hospital patients in the United States were 22 percent less likely to acquire a healthcare-associated infection (HAI) in 2015 than in 2011, according to an article on the Healio website.

The Centers for Disease Control and Prevention (CDC) began a three-phase effort in 2009 to develop and conduct a multistate prevalence survey of HAIs and use of antimicrobial agents. Surveys were conducted in 148 acute-care hospitals in California, Colorado, Connecticut, Georgia, Maryland, Minnesota, New Mexico, New York, Oregon, and Tennessee to assess the prevalence of specific infections.

All 148 hospitals that participated in both the 2011 and 2015 surveys selected one date each year between May 1 and Sept. 30 to conduct the survey on a random sample of patients. The researchers compared patients surveyed in 2011 with those surveyed in 2015.

Magill said the overall reduction in HAIs was largely due to reductions in surgical site infections (SSIs).

The prevalence of other major HAI types such as Clostridium difficile (C. diff) remained unchanged. C. diff infection was reported in 0.56 percent of patients in 2011 and 0.59 percent in 2015.

"Continued focus on improving antimicrobial use as well as isolation precautions and environmental infection control approaches are critical to achieving reductions in CDI," Magill said.

In an article on the MedPage website, Magill cautioned that the findings are based on a small number of hospitals and doesn't take into account changes in diagnostics that might have led to an overestimated of C. diff infection in 2015.