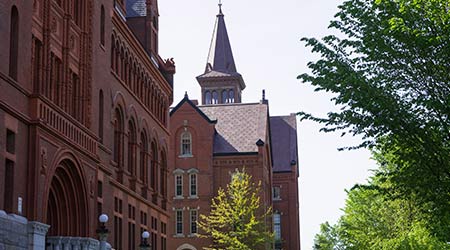 The Princeton Review has released its annual “Guide to Green Colleges” list, which 50 colleges and universities based on their green practices and program.

The vast majority of the schools listed are in the United States, though 16 Canadian colleges and one from both Egypt and Greece made the cut.

Editors at The Princeton Review analyzed more than 25 data points to compile the list of the top 50 green colleges. These criteria included the schools’ academic offerings, campus policies and practices and green initiatives.

"These schools are standouts for their exemplary commitments to sustainability," says Rob Franek, The Princeton Review’s editor-in-chief, in a press release. "With initiatives ranging from solar-powered residence halls and tray-less dining halls to robust offerings in environmental studies, they are, each in their own ways, outstanding institutions for students seeking to study and live at a green college. We recommend these schools highly and we are especially pleased to salute them during National Campus Sustainability Month."

The survey suggests that college applicants and their parents place great importance on environmental and sustainability issues.

The College of the Atlantic in Bar Harbor, Maine, earned the top spot on the guide's Top 50 Green Colleges ranking list for the fourth consecutive year. Established in 1969, College of the Atlantic was the first college in the U.S. specifically founded to focus on the relationship between humans and the environment. In 2007, it became the first carbon-neutral college in the U.S. It has since committed to becoming a fossil fuel-free campus by 2030.

The other universities in the top five, are, in this order: State University of New York — College of Environmental Science and Forestry, Dickinson College, University of Vermont and St. Mary's College of Maryland.

The entire guide can be accessed here.

Of course, cleaning plays a huge role in a campus’ commitment to being both green and sustainable. Knowing this, the facilities services departments at universities like the University of California Riverside are participating in events on campus where they can introduce, promote and share how their cleaning and services make the university more green.