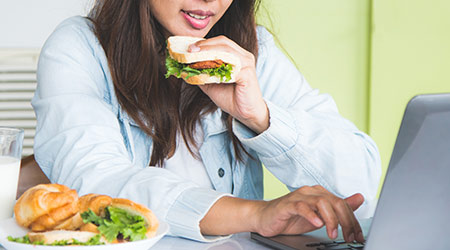 If not cleaned properly and on a regular basis, the average work desk is prone to be 400 times dirtier than a toilet seat and 100 times less hygienic than a kitchen table. In fact, according to Commercial Café, the most germ-infected areas are the traditional office phone, the keyboard and the mouse — all of which have buttons that are rarely thoroughly cleaned.

During the average day, workers likely touch their keyboard with dirty, unwashed hands dozens of times. Many also eat meals at their desk and then leave the scraps to sit beside the keyboard for several hours. They may throw away the garbage at the end of the day, but the likelihood of actually spraying and disinfecting the desk is slim.

These microbes can be the root cause of various illnesses and also prolong sickness. Influenza, the common cold and norovirus, as well as Hepatitis A and B, all thrive in messy, uncared for environments. Dangerous microbes such as MRSA can live on a germ-infested keyboard or work phone for between six weeks and seven months.

If protection from germs and bacteria isn't incentive enough, a clean office can also clear the mind and increase productivity. In fact, disorganization and clutter can cause workers to have extreme anxiety when making decisions, according to Psychology Today. It can also make them feel burned out and reduce their ability to concentrate.

Research has confirmed that clean, well-organized workplaces promote happy employees. A survey conducted in November 2018 found a large majority of manufacturing employees identify operational efficiency (96 percent), safety and hygiene (94 percent), and organization of work environments (93 percent) as top enhancers of their happiness on the job.