Gold Toilet To Be Placed At Churchill's Birthplace 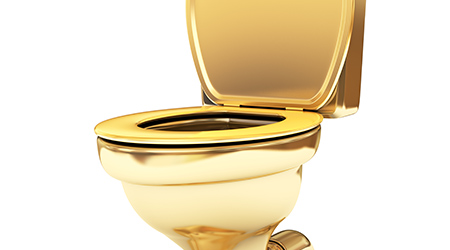 Winston Churchill’s childhood home is receiving a throne fit for a Prime Minister. Well, not exactly a “throne,” but certainly a seat that screams wealth and prestige.

A functioning toilet made out of solid gold is being placed in one of the restrooms at Blenheim Palace in England, near where the famed leader slept, according to The Guardian. Named ”America,” the piece of art is comprised of 18-carat gold and will be on display from September to late October.

This isn’t the first time “America” the toilet has made headlines. When President Donald Trump asked for a Van Goh painting to be lent to the White House, the Guggenheim museum in New York rejected the request, instead offering the gold toilet.

While reports on gold toilets are actually few and far between, it’s not uncommon to hear reports of neat, if not gorgeous, public restrooms. The public loves the restrooms at the J.N. “Ding” Darling National Wildlife Refuge in Sanibel, Florida. So much so that they named the lavatories, which are covered in images of water mangrove and birds, and adorned with sculptures of sea and fresh-water based animal life, the winner of the 2018 America’s Best Restroom contest.

The opportunity to vote on public restroom royalty once again has almost passed. The public has just until Friday to vote on the 2019 America’s Best Restroom Contest.