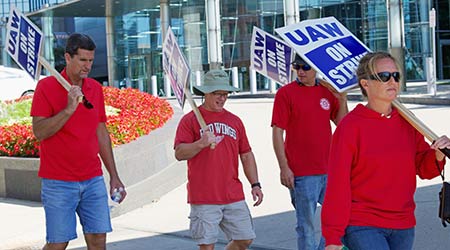 Hundreds of General Motors janitors reached an agreement which would end their high-profile employment strike, reports the Detroit Free Press.

The 850 janitors, all of whom belong to the United Automobile Workers union, have come to a tentative agreement with Aramark, which employs the janitors and maintenance workers that service the five GM sites on strike.

The two sides have been working on a contract extension since March 2018, but couldn’t come to an agreement. Upset, the janitors began striking on Sept. 15, just one day before GM autoworkers began their large strike.

The terms of the agreement have not been disclosed, but the Free Press reports the janitors were being paid between $11-$15.18 an hour.

The agreement between Aramark and the GM janitors comes just days after an ensuing strike of nearly 11,000 unionized janitors in the Washington, D.C. area was avoided following passionate protesting.