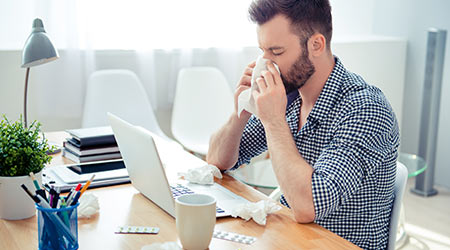 The 2017-2018 flu season is getting nastier than usual. Many states are reporting much higher rates of flu-related hospitalizations than at this point a year ago.

For instance, emergency rooms in California and Arizona are packed with flu sufferers, and drugs that ease the illness are in short supply as doctors struggle with the spike in cases, according to an article on the Medicine Net website.

The misery is not just in the West, however. The Chicago Tribune is reporting that DuPage County weekly influenza surveillance reports are showing totals four times higher compared to the same period last year. There were 17 people admitted to the intensive care units of county hospitals during the last two weeks of December 2017 compared to only six ICU admissions as of Dec. 31, 2016.

In addition, many hospitals in the U.S are struggling with a shortage of bags that contain fluids that deliver medicine to treat dehydrated patients. Many of these bags are produced by factories in Puerto Rico, that are still having power problems from Hurricane Maria.

And according to the U.S. Centers for Disease Control and Prevention (CDC), 13 children have already died from the flu this season. The sickness from the flu is caused by a number of viral strands. This season’s dominant strain — influenza A(H3N2) — is a particularly tough one, according to an article from Yahoo News.

But it’s only a stronger viral strain — it’s also harder to vaccinate against.

The flu mutates so much from year to year that it’s hard to effectively cover all viral bases with a single vaccine, according to Yahoo.