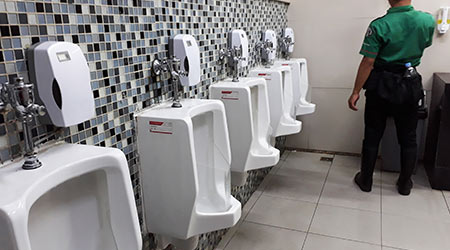 There have been several recent studies indicating more facilities will be installing no-water urinals in the coming decade. Several reasons are given, and the most pressing is what is happening right now in California.

The state has chronic water problems and is now experiencing "abnormally low" rainfall. This could force the state's building owners and managers to once again look for new ways to scale back water consumption, shining the light on waterless urinals.

However, because many of these installations will be in existing buildings  (replacing water-using urinals with a no-water urinals) many building owners/managers find they have questions they need answered.

According to Klaus Reichardt, CEO and founder of Waterless Co., Inc, these are the most common questions and their answers:

Will the no-water urinals have the same footprint as the urinal we are removing?

Waterless urinals come in different shapes and sizes. However, many look exactly like traditional urinals, having virtually the same footprint.

Does this mean we can place the new waterless urinal over the old footprint?

Typically, it is a simple even exchange. However, in some cases, a drain line may need to be adjusted, which can be handled by a competent plumber. Another thing, make sure the placement of the urinal is ADA compliant.

Yes. In fact, sports venues are now one of the biggest markets for no-water urinals. Sports facilities use millions of gallons of water each year and are being asked to cut consumption. Installing waterless urinals is one of the easiest ways to accomplish this.

What do we do with the water pipes delivering water to the urinals?

By code, a plumber should be called in to handle this and other parts of the installation. The plumber will remove the flush valve parts and cap the water pipe, so there is no leakage, giving the area a clean look.

Do we need to clean the current drain pipes?

Yes. The pipes should be "snaked" to clear any existing blockage. Further, sediment has likely developed. Some plumbers now use enzyme cleaners that "feed" on bacteria and microbes in the pipeline, effectively removing them.

What do we do with the old urinals?

Millions of urinals end up in landfills every year, where they rarely decompose. Recycling organizations will remove the old urinals, crushing them into scrap, so that they can be used for other uses.