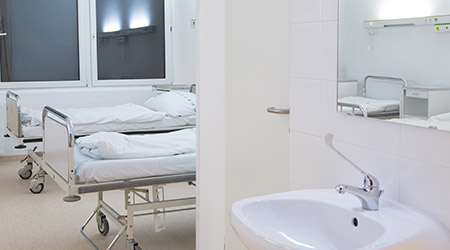 New findings by the National Institutes of Health (NIH) has found that healthcare facility plumbing systems can be large reservoirs of drug-resistant superbug germs that share their superpowers with other bacteria, according to an article on the NBC News website.

An examination of the plumbing at the NIH hospital outside Washington, D.C., showed drains can be loaded with dangerous bacteria. NIH researchers believe that the situation is not unusual.

And apparently the superbugs are breeding down there, the study said, passing along their drug-resistant properties to other species of germs.

The superbugs are not common elsewhere in the hospitals, however. And they are unlikely to be a threat to the general public.

The NIH began looking into where germs live in hospitals after an outbreak of antibiotic-resistant infections killed seven patients at the NIH Clinical Center in 2011-2012.

They discovered many of the bugs were living in the plumbing and scrubbed out sink drains. Researchers  found that the bacteria can splash back out of sink drains.

A second NIH study found the superbugs were not usually found as bed rails and other high touch areas. But drains and housekeeping storage closets were a common source of the bacteria.

“The wastewater pipe system appears to be a reservoir for carbapenamase-producing organisms."