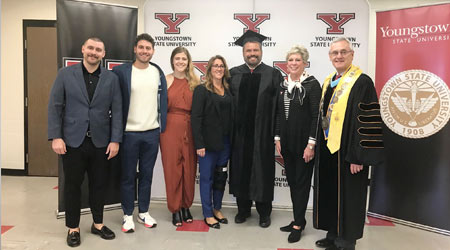 As reported by The Vindicator:

Lewis, who earned a bachelor’s degree in business administration from YSU, recalled having gone through difficult times about 30 years ago. Nevertheless, living on his own, working hard and being part of on-campus organizations helped him develop his character, he told the grads.

Lewis advised the students to consider how they wish to be perceived, as well as to maintain a balance between working hard and “smart” and setting aside time for themselves. They also shouldn’t allow a lack of immediate success to deter them from engaging in hard work, he explained.

Lewis also stressed what he sees as the importance of building face-to-face relationships – especially in this day and age of ubiquitous technology, which has a way of magnifying the smallest of mistakes and choices one makes.

In addition to his keynote presentation, Lewis was awarded an honorary Doctor of Business Administration degree from his alma mater.