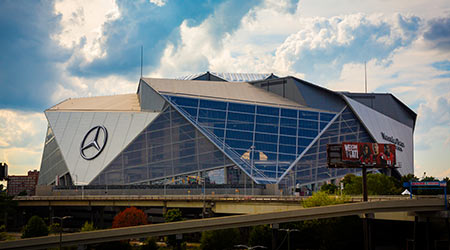 Mercedes Benz Stadium in Atlanta will play home to the National Football League’s Super Bowl LIII when the game kicks off Feb. 3. Millions from around the world will view the annual spectacle on TV and tens of thousands more in person, creating an atmosphere of fandom that’s unrivaled in American sports. Despite all the high stakes and attention, one part of the pregame ritual should be business as usual.

Mercedes Benz Stadium is LEED Platinum Certified, so its operators began to seek out cleaners that met those stringent criteria when it opened in 2017. The custodial services that care for the stadium contacted SouthEast Link, Atlanta, and the company has been supplying the stadium with GenEon OSG (engineered water) for its cleaning needs ever since.

Given the enormity of the event, one might assume SouthEast Link has been tasked with supplying Mercedes Benz Stadium with more engineered water than it usually does, but things don’t change just because it’s the Super Bowl, says Jack Adelman, VP of Education and Training at SouthEast Link.

Between hosting the NFL’s Atlanta Falcons, Major League Soccer’s Atlanta United FC, and various other entertainment events, Mercedes Benz Stadium gets plenty of use — it went unused just one day in 2018. As such, crews don’t have to deviate from their routine practice of cleaning with electrostatic water. And the water is everywhere — hallways, locker rooms, etc. And some spots need more attention than others.

“You can imagine when you get 73,000 people in a football game, urine issues are big there in the restrooms,” says Jack Adelman, VP of Education and Training at SouthEast Link.

One of the greatest concerns stadium personal have is the spread of staph infections or MRSA in team locker rooms and other areas players frequent because it’s so highly contagious, says Adelman. Should one player come down with such an infection, it could spread like wildfire through the whole 53-man roster. And a sick Tom Brady or Aaron Donald isn’t good for the game.

To better improve the coverage of the engineered water on locker room surfaces and throughout the stadium, janitorial workers use backpacked electrostatic sprayers powered by lithium ion. Adelman says the crews moved to the product after discovering they wanted to improve upon the plug in misting units they had.

While there is no NFL venue quite like Mercedes Benz Stadium, it’s very possible that some of the other stadiums will soon have cleaning equipment that’s similar to what’s used in Atlanta. The NFL’s offices and the Miami Dolphins franchise in particular have talked to SouthEast Link about implementing similar operations, says Adelman

The business of others would be a welcome addition, but for now, there’s plenty of pride to be had in SouthEast Link supplying Mercedes Benz Stadium.

“We’re proud because we’re a small company and Mercedes Benz Stadium is nationally known and a pride of Atlanta,” says Adelman. “It’s a beautiful stadium.”