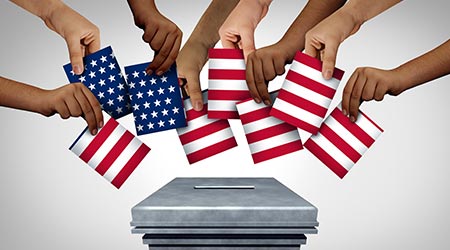 A survey given to employed Americans over the last year found they are more likely to stay with an employer who encourages voting.

Just over two-thirds of those surveyed by Perceptyx Research & Insights said the company that employs them encourages them to vote. Nearly the same percentage of those surveyed said their employer will grant them time away from work to go vote on Election Day. In fact, that number could be even a little higher as 15 percent said they don't know what their employer's policy is for Election Day.

Time off to exercise one's right to vote is obviously benefits employees and the democratic process as a whole, as 90 percent of workers granted this time plan to vote, compared to the 72 percent who aren't permitted that luxury. The significance of this right granted to workers is most pronounced among employees aged 18 to 24, as the survey said these individuals are 19 percent more likely to fill out a ballot when given time to do so.

When it comes to encouraging workers to vote, companies benefit, too. The survey found that companies that suggest workers vote are more likely to be recommended as a good place to work by an employee. Employees are also 20 percent more likely to stay for at least one more year with an employer who encouraged them to vote.

Additionally, nearly 70 percent of those surveyed by Perceptyx said they have talked politics with a coworker in the last year. A little less than half of respondents said political discussions have lead to a disagreement between a coworker and themselves in which the coworker tried to convince them to vote for the opposite political party.