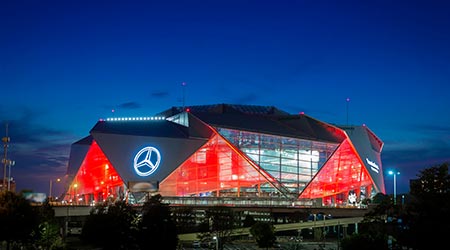 Drones will be used to clean Mercedes-Benz Stadium after Atlanta Falcons home games now that the team is opening the venues to fans in a limited capacity, reports ESPN.

Playing on the road against the Green Bay Packers this week, the Falcons don't return home until their Oct. 11 game against the rival Carolina Panthers. The team didn't allow fans into the 71,000-seat state of the art stadium during its first two home games, though a few hundred family members and friends of the team were allowed to watch the Falcons' loss to the Chicago Bears last Sunday.

Two D1 drones that disinfect using electrostatic technology will be used at the stadium through the Falcons' partnership with Lucid Drone Technologies of Charlotte, North Carolina. The solution used to disinfect is a nontoxic hypochlorous acid that meets Environmental Protection Agency guidelines.

The Falcons aren't the only NFL team that hopes to keep fans safe using the latest cleaning technologies. ESPN reports that the Panthers are using a "germ-zapping robot" in the locker rooms and office spaces within Bank of America Stadium.

For more on what electrostatic cleaning does to prevent infection, read this past story from Sanitary Maintenance.