Drones Could Be Future Of Campus Cleaning 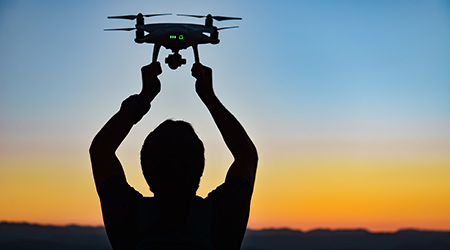 The 2020 fall semester has kicked off at some universities and colleges across the country and will start at most within the coming few weeks. While the term papers and stressful exams will still be there, a lot of what the college experience entails is going to change this year due to COVID-19. Some students and staff won't even step foot on campus in an effort to stop the spread of the virus. Those that will return to the lecture halls and study groups will often do so with social distancing procedures in place. Some changes will even be occurring even after the pandemic is gone.

Inspired by reports that the Spanish Army is testing whether crop-spraying techniques can be used to disinfect large outdoor spaces, the publication EdTech asks whether colleges could eventually drop disinfectant and sanitizer over their campuses using drones.

According to EdTech, some experts say it's possible that drones could be flown over massive lecture halls to disinfect and sanitize faster than humans could. For example, Ella Atkins, an aerospace engineering professor at the University of Michigan and IEEE senior member, says there are "real possibilities" that drones could drop fast-drying solution as they're flown in pattern over tables and chairs. She says small drones probably couldn't carry all of the chemicals needed, so they'd have to do something like carry a long hose that's led back to a big bucket of solution.

Another professor at Jefferson University tells EdTech that drones have the potential to be very effective in spreading cleaning solutions, but the process might require some sort of advanced mapping system that would tell the drone where and where not to go.

This isn't the first time people have discussed using drones for cleaning purposes. Earlier this summer, we shared a story regarding a drone company in Florida that has switched up its business model so that it's now sanitizing schools, parks, airports and music venues using its drones.