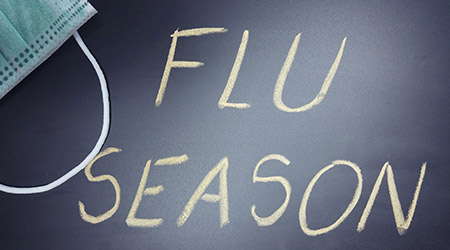 The flu had been an absolute terror to Americans over the last few years, lasting longer than usual and infecting many more than normal. But in a year where nothing appears to be the same in life, this trend is likely to be bucked, too.

Dr. Bob Lahita, chairman of St. Joseph's Healthcare System's Department of Medicine, says the flu could be "nonexistent this fall" in the United States, according to a report from CBS News.

The implementation of social distancing and improved infection control measures in the United States and around the globe due to COVID-19 is the reason why there could be a potential drop in flu cases during the 2020-2021 season.

Flu cases are already down in several countries. Australia, which is right now in its winter season, is reporting significantly less hospital admissions due to the flu for this time of year. Early reports of the flu are also down in South Korea, Canada, China and the United Kingdom, reports Reuters.

But the public shouldn't become too hopeful due to the early numbers. For one, the World Health Organization has warned that the number of influenza cases reported could be misleading because some countries are spending much of their energy focusing on COVID-19.

Even though he believes mask-wearing and social distancing will do a lot to decrease flu cases in the United States this season, Lahita still recommends Americans get a flu shot.