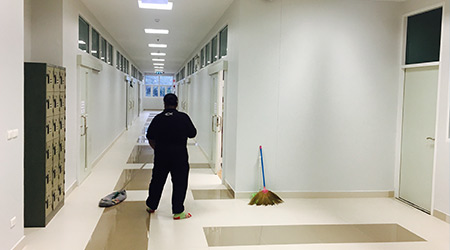 Following months of poor publicity for Chicago Public Schools (CPS), reports indicate that  schools are once again passing cleanliness inspections. But, district officials are keeping quiet about which schools now meet expected standards and details of the new inspections.

In April, inspectors quietly visited 125 schools throughout the district. Ninety-one of them received failing marks. As a result, officials tallied fines as high as $38,000 in potential violations at one school, with the highest potential penalty found in schools serving low-income children of color.

According to Chicago Sun Times reporting, mums the word on the re-inspection reports from those 91 schools that originally failed to meet cleaning expectations. What is known is that roughly 200 additional schools have now been inspected, but results are only available for 150 of them.

The Sun Times reports that pass rates for the schools have significantly increased to close to 70 percent.

CPS outsourced some of its facilities work to Aramark and to SodexoMAGIC several years ago and on July 1 is poised to hand over $427 million more in contracts to both companies.

Following earlier reports of deplorable conditions in schools, contract cleaners conducted unscheduled cleaning to help remedy the situation, but reports indicate that the efforts might have caused more harm. Since that time, school officials have monitored the situation and prepared school principals and building managers for the latest round of inspections.

School officials suggest that ongoing capital problems contributed to the cleanliness issues. Reportedly, CPS has yet to set its final capital budget and won’t publicly say which schools or projects will land on its eventual list. Meanwhile, the district has agreed to hire 100 more custodians, plus 100 more for summer deep-cleaning.