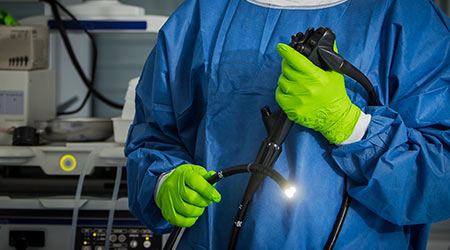 The food and drug administration (FDA) has approved a fully disposable duodenoscope, which could lead to less superbug breakouts, reports the Los Angeles Times.

The duodenoscope is a tool commonly used by the healthcare community. No duodenoscope on the market today is fully disposable, which is a major issue since the tool is very hard to clean properly.

“Duodenoscopes are complex instruments that contain many small working parts, says the FDA’s website. “If not thoroughly cleaned and disinfected, tissue or fluid from one patient can remain in a duodenoscope when it is used on a subsequent patient. In rare cases, this can lead to patient-to-patient transmission of infection.

At least 35 deaths in the United States have been connected to bacteria left on duodenoscopes since 2013. The Times previously reported that one scope manufacturer, Olympus, knew of possible flaws with its scope as early as 2012 after infections broke out in the Netherlands. Only after three patients died at Ronald Reagan UCLA Medical Center in 2015 did the company come forward with its concerns.

The hope is that this new duodenoscope made by Boston Scientific prevents similar occurrences from happening.

The cost of disposable duodenoscope has not yet been disclosed, but it is known that reusable scopes usually cost about $40,000.

The FDA has also approved other types of duodenoscopes whose hard-to-clean parts can be replaced after use.

While the use of Boston Scientific’s duodenoscope could save lives, at least one hospital-safety consultant told the Times that he thinks a costly disposable scope will prevent hospitals form throwing away the tool after each use.