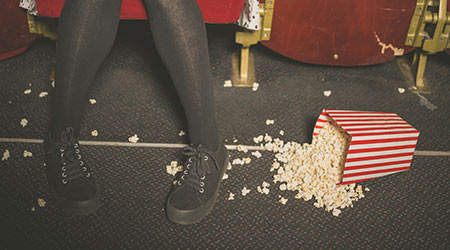 Workers servicing some of the major movie theater chains — AMC, Regal Entertainment and Cinemark — are grossly underpaid, overworked and easily expendable, according to Variety reports. Instead of utilizing the teenage ushers of old for cleaning tasks, more theaters are opting to outsource the work. Those contractors then subcontract to companies that employ a vast immigrant workforce and skirt around legalities of providing a living wage.

Over the last eight months, Variety has investigated wage complaints from movie theater janitors across the country, reviewing class-action lawsuits, state labor commission records and investigations by the U.S. Department of Labor.

Variety's research found that AMC and other theater chains keep their costs down by relying on janitorial contractors that use subcontracted labor. These janitors typically have no wage or job protections.

For example, it's not unusual for janitors to work all night. To clear popcorn and wrappers out of the aisles, janitors go row by row with backpack vacuums. They then circle back and wipe salt off the seats and clean soda out of cup holders. For their efforts, one janitor interviewed commented that she takes home $300 a week, which is equal to roughly $5 an hour.

Despite growing awareness of the issue, the theater chains are largely immune from legal repercussions, according to Variety. Because they do not directly employ janitors, they are typically excluded from class-action wage cases.

The theater companies are "super cheap," according to one janitorial company executive who did not want to be identified. He said many companies "don’t care if you use slave labor.”