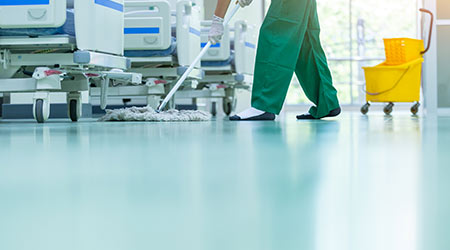 The floors of hospital rooms are quickly and frequently contaminated with antibiotic-resistant bacteria within hours of patient admission, creating a route of transfer of potentially dangerous organisms to patients, according to a study published Monday as part of the proceedings from Decennial 2020: The Sixth International Conference on Healthcare-Associated Infections.

Decennial 2020 is an initiative of the Centers for Disease Control and Prevention and the Society for Healthcare Epidemiology of America (SHEA), the latter of which shared the news in a press release.

“If bacteria stayed on floors this wouldn’t matter, but we’re seeing clear evidence that these organisms are transferred to patients, despite our current control efforts,” said Curtis Donskey, MD, senior author of the study and hospital epidemiologist at the Cleveland VA Medical Center. “Hand hygiene is critical, but we need to develop practical approaches to reduce underappreciated sources of pathogens to protect patients.”

Researchers with the Northeast Ohio VA Healthcare System closely tracked contamination in hospital rooms of 17 newly admitted patients to identify the timing and route of transfer of bacteria within patients’ rooms. Before testing, rooms were thoroughly cleaned and sanitized and all patients screened negative for methicillin-resistant Staphylococcus aureus (MRSA) and other healthcare-associated bacteria. Researchers then observed patients’ interactions with healthcare personnel and portable equipment, collecting cultures one-to-three times per day from patients, their socks, beds and other high-touch surfaces, as well as key sections of the floor.

Nearly half of rooms tested positive for MRSA within the first 24 hours, and MRSA, C. difficile, and vancomycin-resistant enterococci (VRE) pathogens were identified in 58 percent of patient rooms within four days of admission. Contamination often started on the floors, but ultimately moved to patients’ socks, bedding, and nearby surfaces.

"While we’re showing that these scary sounding bugs can make their way into a patient’s room and near them, not everyone who encounters a pathogen will get an infection,” said Sarah Redmond, lead author and a medical student at Case Western Reserve University School of Medicine, according to SHEA's press release. “With that in mind, are there simple ways to address these areas of exposure without placing too much emphasis on the risk?”

In a related study published in August in Infection Control & Hospital Epidemiology, the authors reported similar findings of frequent detection of SARS-CoV-2 nucleic acid on floors and on shoes of personnel on a COVID-19 ward. The authors note that further research is needed to clarify the role of floor contamination in transmission of both bacterial and viral pathogens and to identify practical approaches to address contamination. On the COVID-19 ward, contamination was reduced with simple modifications of floor cleaning and disinfection protocols.

Researchers noted several limitations of the study, including the small sample size and variables in characteristics among patients and healthcare personnel that may impact how generalizable the study findings are to other hospitals.