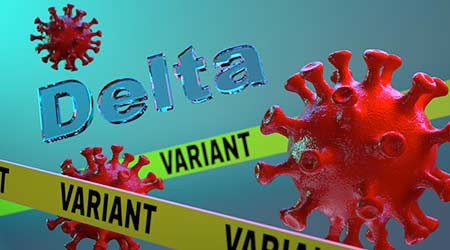 The Delta variant of COVID-19 — which is now responsible for nearly five out of every six new cases in the U.S. (83 percent) — has overtaken the original strain of the virus that dominated the first part of the pandemic. While the methods of transmission and subsequent protocols for infection control remain the same, it’s important to recognize that the symptoms are often different between the Delta and other strains of the virus, NBC 5 Chicago reports.

In studies being conducted by Yale Medicine that continue to evolve with new information each day, the Delta variant appears to cause more serious iterations of cold symptoms including runny nose, headache, sore throat and fever. Meanwhile coughing and the loss of taste and/or smell, which are telltale signs of the initial and alpha strain, appear to be less common in the Delta variant.

While more contagious and often producing more severe cold-like symptoms, studies have shown that the conventional vaccines taken to combat the initial and other strains of COVID-19, including Pfizer and Moderna, are also successful against the Delta variant.

As more information continues to be gathered on the signs and capabilities of the Delta variant, cleaning professionals are encouraged to keep up with the latest guidelines from the Centers for Disease Control and Prevention (CDC) for maximizing occupant and facility safety.