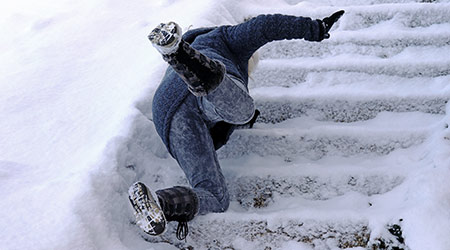 A sign of the dangerous claims facilities face, a 57-year-old man has pleaded guilty to insurance fraud after being caught staging a slip-and-fall incident, reports News 12 New Jersey.

The man was caught because video surveillance showed him throwing ice on the floor, then laying down to mimic a slip-and-fall accident.

In another event, a hotel owner is battling a lawsuit after a guest slipped on snow and ice on its property. The hotel argues it had no duty to protect the plaintiff or others against a slip-and-fall incident because the danger was obvious, thus it could have been avoided, reports the West Virginia Record.

While the legal ramifications of the alleged slip-and-fall on hotel property are yet to be determined, one recent case proves just how damning such an accident can be for a facility.

A New Jersey woman was recently awarded $1.24 million for a 2014 slip-and-fall incident at a dental office that caused her to undergo a number of back surgeries, reports My Central Jersey.