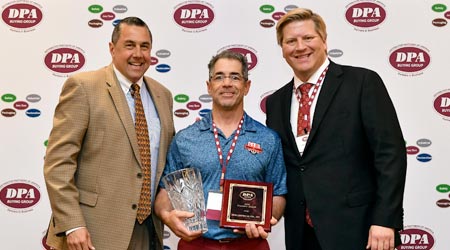 Distributor Partners of America (DPA), a member-driven buying and marketing group, recently announced the recipient of its prestigious Founders Award at its annual buying and networking conference in Indianapolis, Indiana. This year’s Founders Award was the twelfth presented in DPA’s history and the honor went to Gem Chemical Co., Inc. (Evansville, IN).

“DPA’s Founders Award recognizes a company or individual that has been with DPA from the beginning and that embodies the spirit of the organization. Gem Chemical Company has been a loyal member of our organization, and they’ve grown tremendously with DPA’s preferred vendors. Brian Magazine is not only an exemplary DPA distributor, but he is also an outstanding citizen in his community.” Zachary T. Haines, DPA CEO.