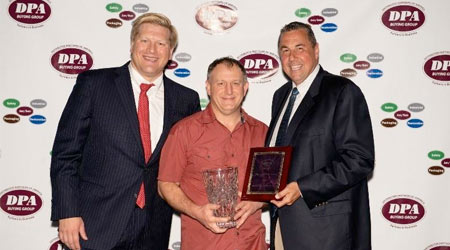 The 2017 JanSan Distributor of the Year award went to State Janitorial Supply, of Dover, DE. Deb USA, of Charlotte, NC, was named the DPA JanSan Supplier of the Year.

DPA also announced the recipient of its prestigious Founder’s Award — the eleventh given in the group's history. That honor went to Colker Company, of Pittsburgh, PA.

“The DPA Founder’s Award recognizes a company or individual that has been with DPA from the beginning and that embodies the spirit of the organization. Colker Company has been a loyal member of our organization, and they’ve grown tremendously with DPA’s preferred vendors. Jeff Tishko has also served with distinction as DPA’s President. We are grateful for his vision and leadership,” says Zachary T. Haines, DPA CEO.

Finally, DPA recognized their longstanding members during the annual event. Four distributor companies were honored with special membership milestone pins at the group’s award banquet. Knight Marketing Corp., of Maspeth, NY, and JD Distributors, of Union City, TN, were both recognized for 10 years of dedication. In honor of 15 years, Higley Industries, of Dubuque, IA, and Diamond Products, of Helena, MT, were both recognized.